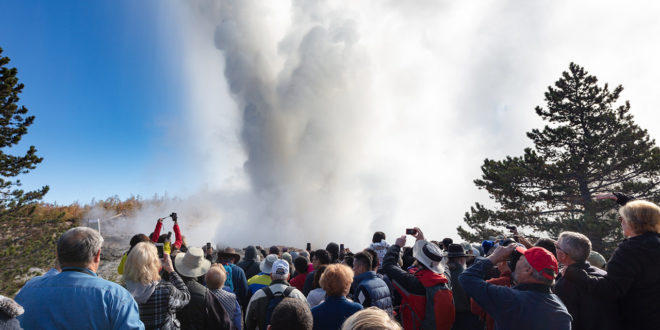 By Yellowstone standards, a rise of five inches over 17 years is considered pretty rapid growth, so uplift at the Norris Geyser Basin is notable, with researchers saying deep magma intrusion is fueling the growth—and could also explain why we are seeing relatively frequent Steamboat Geyser eruptions again.

The Norris Geyser Basin is a huge area within the Yellowstone Caldera, comprising some six square miles. Using GPS and satellite radar data, researchers have determined that over the last 24 or so years we’ve seen the area along the north caldera rim rise, slump and then rise again. Not a surprise: since researchers first mapped out the Yellowstone thermal system, it’s been documented that much of what’s in the Yellowstone caldera rises and falls over time, as changes in the underground “plumbing” moves.

With the Norris Geyser Basin, that rise and fall has been documented as one of the most volatile areas in Yellowstone. In a study published in Journal of Geophysical Research: Solid Earth, U. S. Geological Survey researchers postulate that an infusion of deep magma in the 1996-2001 period triggered a volatile ascent and then accumulation at shallow levels. We then saw a rapid uplift of almost six inches in the Norris Geyser Basin, ceasing after a 4.9-magnitude earthquake on March 30, 2014, causing a rupture in a reservoir created by the intruded magma, All in all, the Norris Geyser Basin then rose an average of several centimeters annually beginning in 2016 and continuing through 2019.

And that continued rise is likely causing the frequent Steamboat Geyser eruptions. In 2019 there were 48 documented eruptions of Steamboat Geyser, and that pace appears to be roughly the same for 2020.