Although it is not the oldest hotel in Yellowstone National Park, the Old Faithful Inn is the Park’s most emblematic.

As one of the first examples of “parkitecture”—a style of building that sought to blend with the landscape while still offering visitors a refined experience—the Old Faithful Inn has exerted immense influence on National Park Service architects and the imagination of visitors. Made a National Landmark in 1987, the Inn is also an important relic of Yellowstone’s development from a far-flung wonderland to a premier visitor destination.

Despite Old Faithful’s obvious appeal as a visitor hub, previous attempts at a permanent hotel failed. The Upper Basin Hotel (a rather austere clapboard building dubbed “The Shack,” built in 1885) burned down in 1894. Between 1895 and 1903, a group of tents arranged near the burn site was dubbed the Firehole Hotel. Architect A.W. Spaulding submitted a hotel proposal for the area in 1898 but construction never materialized.

In 1902, Yellowstone Park Company president Harry W. Child met Robert C. Reamer, a self-taught architect. With Child’s sponsorship, Reamer went on to design and oversee renovations for numerous buildings in Yellowstone National Park. However, the Old Faithful Inn (constructed in 1903, opened June 1, 1904) remains Reamer’s claim to fame, both for its grandeur and its idiosyncrasy. In describing the Inn, Reamer’s rationale could very well apply to Yellowstone and the national park idea:

“I built [the Inn] in keeping with the place where it stands. Nobody could improve upon that. To be at discord with the landscape would be almost a crime. To try to improve upon it would be an impertinence.” 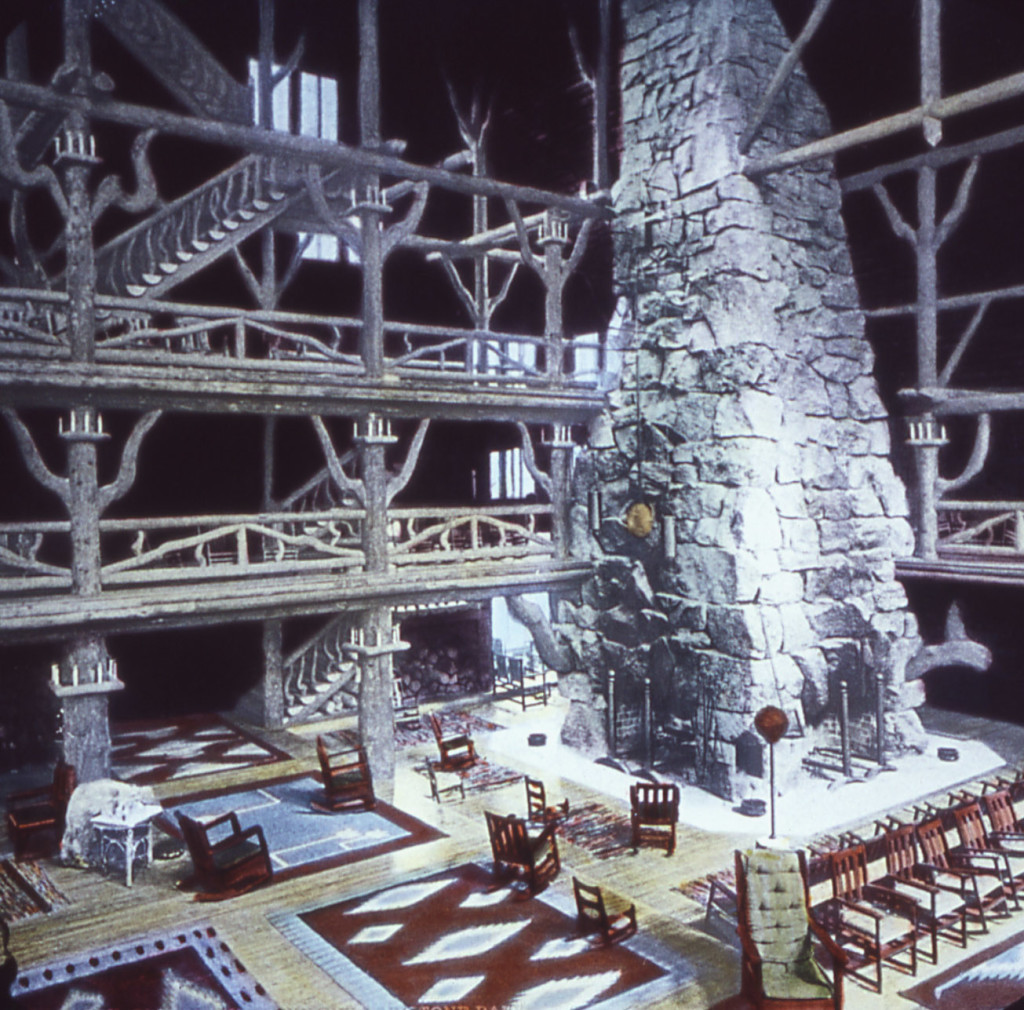 The Old Faithful Inn perfectly exemplifies these aphorisms and also articulates several tenets of parkitecture. Firstly, all the materials are from the Park. The lodgepole pines were logged from a site four miles south of Old Faithful. The chimney material (made up of 500 tons of rhyolite rock) came from a quarry just five miles away. Secondly, the Inn does not obscure these materials. Despite the Inn’s grand design, in its construction, it’s more like a log cabin. Thirdly, it stands out. Much like the surrounding landscape, the Inn demands attention and elicits appreciation.

When you step into the lobby, for instance, you do not lose your sense of place in the Park. You feel it. The walls are veritable forests, the log walls (riddled with knots, smooth and curving beneath your hand) rise high above you—the lobby measures 76-and-a-half feet from floor to ceiling. Equally awe-inspiring is the chimney, a great tower of black-grey rock.

Despite its immenseness, the Old Faithful Inn is the epitome of cozy. Leather chairs, including an L of armchairs around the first floor fireplace, abound on the Inn’s three floors. Park musicians play regularly during the afternoon and evening. A porch on the second floor, flanked by espresso and à la carte beer/wine/spirits bars, offers a spectacular view of Old Faithful and the Upper Geyser Basin. Fine food is offered in the Inn’s dining room, as well as the Bear Paw Deli and Bear Pit Lounge. Whether you’re visiting in the peak of summer or in the cool, final days of the season, the Old Faithful Inn always feels accommodating. The Inn has undergone numerous changes over the years. The main structure (dubbed the “Old House”) has been added on to several times over the years: two wings (Reamer designed the East and West wings in 1913 and 1927, respectively) and the Bear Pit Lounge in 1936. Although the Inn has undergone some changes (the glass panels in the Lounge, for instance, used to be made of Douglas fir before they were replaced in 1988; the clockwork on the chimney was updated in 2000) it is largely the same building Reamer envisioned over a century ago, in shape and purpose. All the better, considering it has survived not only cataclysms such as the 1959 Lake Hebgen earthquake and the 1988 Yellowstone fires, but also the regular assailment of Yellowstone’s strong seasons, especially winter.

Despite all this, the Inn has endured, both in Yellowstone and in the imagination of Park visitors.

Rooms at the Old Faithful Inn run the gamut from very basic accommodations to larger suites. On the low end, you have the Old House rooms with one or two queen beds; these rooms feature a sink and historic furnishings, but no private bathroom or closet. (A communal shower is located down the hall.) These rooms retain the flavor of the original 1904 structure, complete with log walls.

Mid-Range Rooms feature a private bathroom and one queen beds, and they’re a little larger than the Old House rooms.

Premium Rooms are located in the east and west wings, and they all feature double beds and bathrooms. A limited number face Old Faithful Geyser. Pricing depends on whether they face the front of the back of the building. (ADA-compliant rooms are available.)

High Range Rooms were renovated in 1998 and 1999, featuring the same style of furnishings in the nearby Snow Lodge.

A limited number of Suites and Semi-Suites are available. A Suitefeatures a sitting room with a refrigerator and a separate bedroom with two queen beds; a semi-suite is smaller and lacks the refrigerator.