Since 2010, the Old Faithful Visitor Center has been a draw for people looking to take a break from the boardwalks.

Encompassing museum exhibits, a kid’s area, a bookstore, theater, and ranger help desk, the center is a must-see for anyone visiting Old Faithful, be they first-timers or old-timers.

The current visitor center replaced a slightly shabbier center built in the 1970s. In all likelihood, no tears were shed by the decision to replace it. Some tears may have been shed, however, by the decision to replace that center’s predecessor: The Old Faithful Museum of Thermal Activity, the area’s first dedicated “trailside museum.” You can see where it was located below, as seen in the 1953 Haynes Guide. The Old Faithful Museum of Thermal Activity endured for most of the 20th century, providing visitors the same thrill as the current facility. The museum, however, was more than a museum; it was an important part of National Park Service history.

The NPS had long agitated to make its presence felt since its establishment in 1916. Cornering the market, as it were, on interpretive services was one strategy. Many guides had operated in Yellowstone since it became a park in 1872, running the gamut from railroad employees to Wylie Way programs.

Official NPS museums proved to be an effective means of establishing the Service’s foothold, but according to historians Kiki Leigh Rydell and Mary Shivers Culpin, writing in “Managing the Matchless Wonders: A History of Administrative Development in Yellowstone National Park, 1872-1965,” they needed a little outside help:

In 1928, the Laura Spelman Rockefeller Memorial, which had first given money to the American Association for Museums for a museum in Yosemite National Park in 1924, provided the full $118,000 requested by [Interior] Secretary Work for construction of the park’s new museums, with two stipulations: first, that any balance unexpended as of December 31, 1929, revert to the memorial, and second, that no public announcement be made of the gift. Horace Albright’s “deep personal interest” in the value of park museums and his personal relationship with John D. Rockefeller, Jr., and family likely contributed to the memorial’s decision to fund the four museums in Yellowstone.

With these funds, the trailside museum concept flourished in Yellowstone—even without the existence of a main museum. As [historian Aubrey] Haines pointed out, these branch museums were intended to “provide a ‘hook-up between an object or spectacle charged with dynamic information and a mind that is receptive to informational impulses.’” They were to be located “at points where some special features of natural history can best be demonstrated.” Hence, each branch museum was to have a theme. At Old Faithful, the theme was thermal activity; at Norris, geology and mineralogy; and at Madison Junction, history. The museum to be built at Fishing Bridge would specialize in fauna and some geology.

The Old Faithful Museum of Thermal Activity was the first built, opening in 1929. Albright hailed it at the time, calling it “finer than the one at Grand Canyon and far finer than the one at Yosemite.” Haines likewise praised these “beautiful structures” in The Yellowstone Story, Vol. 2, lamenting that the NPS later “abandoned the distinctive style it pioneered.”

That style, for the most part, was the product of one man, according to the NPS:

Although not intended as a primary expression of identity, architecture has long helped to define the NPS style. Two periods of intense construction account for the emergence of the architectural forms commonly associated with national and state parks. The first was the result of Franklin D. Roosevelt’s New Deal and the work of the Civilian Conservation Corps during the later years of the Depression. The style, typically called “rustic,” is characterized by the stone and rough-hewn timbers most often used in the western parks, or the adobe typical of the Southwest. From administration buildings and park residences to bridges, fire grates, and water fountains, many fine examples of this style remain today.

The work is largely the legacy of architect Herbert Maier, who worked as a consultant to the NPS during the 1920s and 1930s and later as an employee. Examples of Maier’s work, along with those of Dorothy Waugh, Norman T. Newton, and Albert Good were published in 1938 in a book titled Park and Recreation Structures. In the introduction to the book, then NPS Director Arno Cammerer wrote: “In any area in which the preservation of beauty of Nature is a primary purpose, every proposed modification of the natural landscape deserves to be thoughtfully considered. A basic objective of those who are entrusted with development of such areas is to hold these modifications to a minimum and so to design them that, besides being attractive to look upon, they appear to belong to and be a part of their setting.” As mentioned, the Old Faithful Museum of Thermal Activity was primarily dedicated to educating visitors about Yellowstone’s geyser wonders. However, it served additional functions.

As with the current center, for instance, rangers could be found in this new structure, behind the information desk. They also held regular chats at the amphitheater located just outside the museum. And unlike the Norris, Fishing Bridge or Madison museums, the Old Faithful museum had a certain grandiosity to it. In addition to the exhibits, the museum also had a marvelous courtyard (seen above) full of native flora—a sort of compromise garden in Yellowstone’s relative wilderness.

Surprisingly, despite being the largest and (likely) most trafficked trailside museum in the park, it received little administrative praise. Indeed, the Fishing Bridge and Madison museums got more mention in the 1938 park structures report than Old Faithful did.

So why was the Old Faithful museum torn down? And why do Maier’s other three trailside museums stand? The answer may have to do with the “trailside” part. From the NPS:

The concept of “trailside museums” or field museums came about in the 1920s, when visitors began driving through national parks in their own vehicles rather than on escorted tours provided by park concessions outfits. The first park museums were at Yosemite and Mesa Verde. Maier saw his museums as “not mere passive repositories of ‘exhibits’ but active interpreters and guides to the national and cultural features and historical associations of their parks. They are laboratory manuals…for use not only by the qualified student but by anybody and everybody.” Maier saw the museums aiming to “interpret,” not just to provide cold facts. To him, “the great thing is to get people to go and see; intelligently, if possible; but by all means to see. And nothing conducive to that end is to be disdained.” Maier’s buildings were among the first to house that new concept of “interpretation”–the “revelation of a larger truth that lies behind any statement of fact”–that had developed in the National Park Service through the efforts of Stephen Mather, Horace Albright, Freeman Tilden and others. Herbert Maier understood that concept in the way he designed his museums. 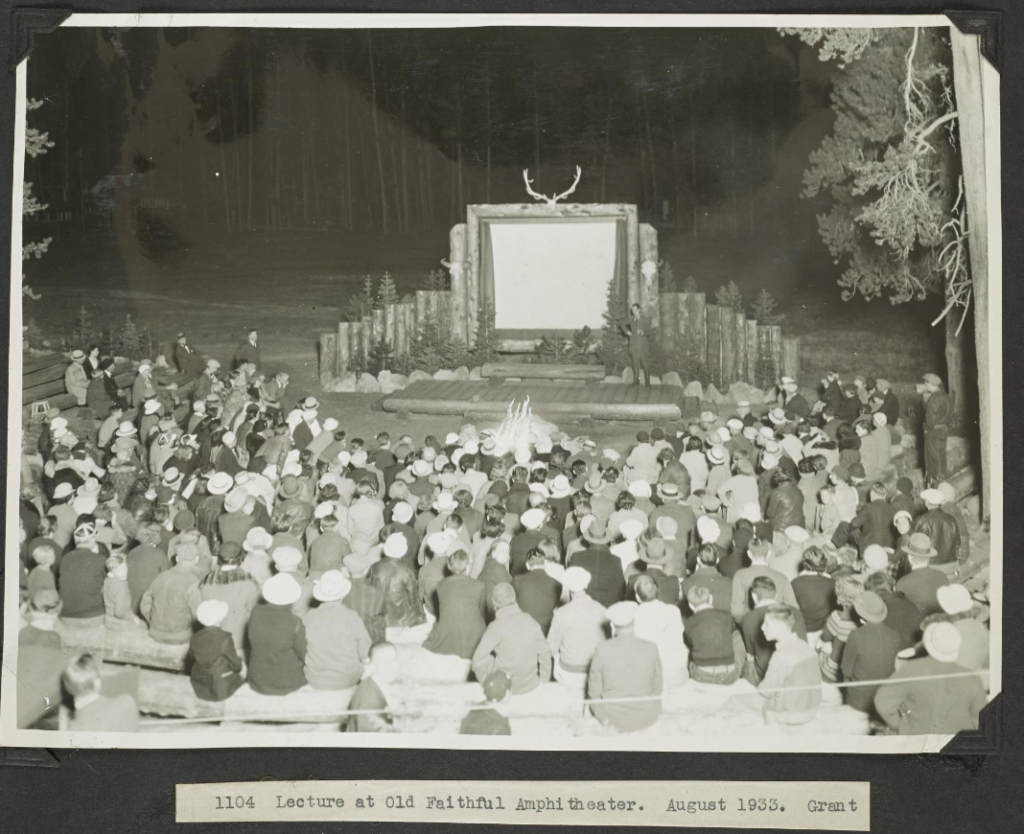 The trouble with having a “trailside” museum in Old Faithful is the amount of traffic it receives. Indeed, as car traffic mounted and visitation to Yellowstone skyrocketed (especially after World War II), it became apparent changes in infrastructure were warranted across the park. This decision drove the Mission 66 project, which famously remade much of the Canyon area. That being said, it also had a lasting impact on the Old Faithful area—including the once-controversial highway overpass, constructed in 1969, that connects Old Faithful to the Grand Loop Road.

The Old Faithful Museum of Thermal Activity was torn down in 1971. The replacement center was built in roughly the same location; said visitor center, of course, was torn down to make way for the current Old Faithful Visitor Center.