Even though you can’t cut your Christmas tree down in Yellowstone National Park, that doesn’t mean you can’t recycle one there.

The National Park Service offers local Mammoth Hot Springs and Gardiner residents a way to recycle their dead tree after the Christmas holidays, park spokeswoman Morgan Warthin said recently. At locations in Mammoth and Gardiner, trees may be dropped off to be hauled away to be mulched for the park’s Native Plants Nursery. The nursery is located inside the park border near Stephens Creek, outside of Gardiner, Montana.

As of early last week, 26 trees had been collected so far, Warthin said, and trees will be accepted until Jan. 31.

The trees will get mulched by the Fire Cache crew this spring with a woodchipper. The chips are used for weed control and fire retention, Warthin said.

The Native Plants Nursery has been in existence for at least 25 years, Warthin said, and takes up about two acres. It is run by Sam Reid, who has managed the nursery since 1991.

The nursery can produce 10-15,000 plants and has a new greenhouse, thanks to a donation from the park’s nonprofit partner, Yellowstone Forever.

(Yellowstone Forever is the new name of the organization created recently by two nonprofits—the Yellowstone Park Foundation and the Yellowstone Association—merging under one title). 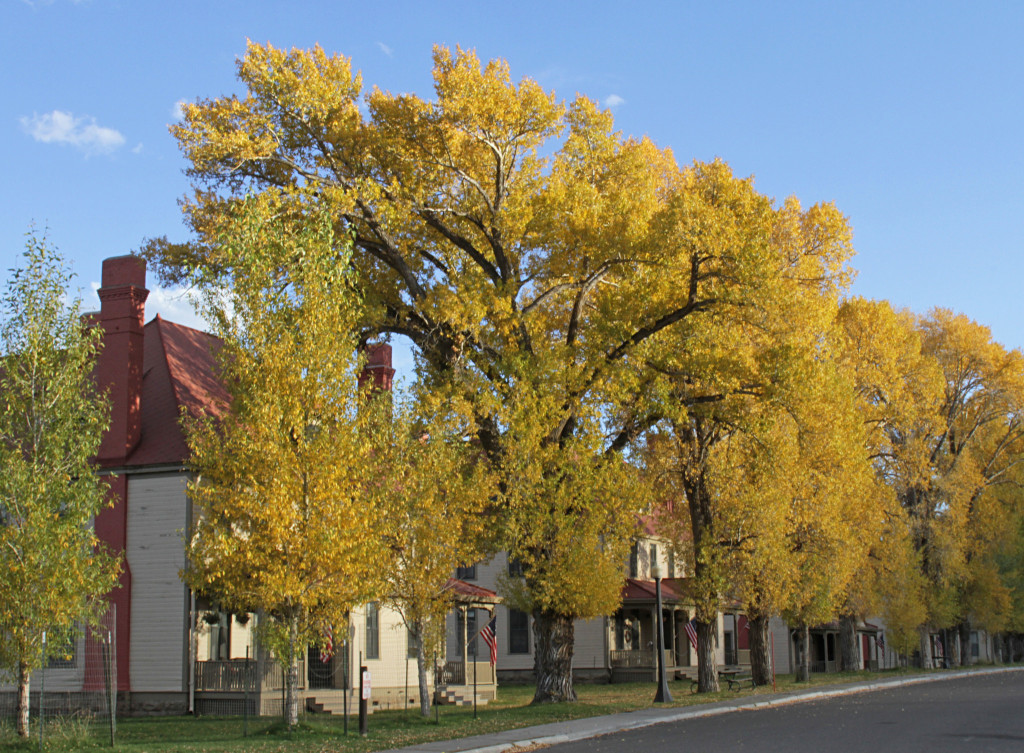 The plants are used to re-plant in disturbed areas in the frontcountry of the park. Plants are used in areas disturbed by road construction, for example. Reid also grows trees to replace dead or fallen ones in frontcountry campgrounds, and to replace the cottonwoods that grow along Officers Row (pictured above) at park headquarters at Mammoth Hot Springs, Warthin explained.

The cottonwoods along Officers Row are historic, so they’re replaced as needed.

Recycling Christmas trees is just a small part of the park’s mission of being as green as possible, Warthin said, and to further those efforts, the park has an official “Green Team,” a committee of employees from different departments that focuses on sustainability, green building practices, recycling, and education, Lynn Chan, park landscape architect and Green Team member said.

The Green Team started out as a grassroots effort has been around since 1995 or 1996, another landscape architect and Green Team member Lori Gruber said. The initial team looked at alternative fuels—mostly in the Maintenance Division—and recycling, she said.

Christmas trees have been recycled for the past seven or eight years, and residents like that their trees aren’t headed for the landfill.

“Mammoth residents think it’s great. It’s fortunate to not have to throw your tree away,” Warthin said. “It gets recycled and used. It’s definitely a worthwhile project in the spirit of recycling.”

Liz Kearney is a former Yellowstone tour guide and snowcoach driver. She lives in Livingston, Montana, where she covers the park and other news for the daily newspaper, the Livingston Enterprise.
Previous Nearly 4.3 Million Visit Yellowstone National Park in 2016
Next Remaining High On Life Defendants Plead Guilty