Once upon a time, bear feeding was as popular (if not more so) than geyser watching in Yellowstone National Park.

Indeed, the practice went beyond the occasional scrap tossed to an obliging bruin by the roadside. Bear feeding was a spectacle, with huge pits of garbage set up for bears to come root around for sustenance—to the delight of observers. And while you may think the practice as archaic, it was a central part of the Yellowstone experience (both advertised and felt) for decades.

As Old As The Park?

Bears have been the Yellowstone area for millennia, and were readily encountered by humans in the period before the establishment of Yellowstone National Park in 1872.

However, according to Paul Schullery, writing in Searching for Yellowstone, bears of all size and color were not initially well-regard within Park boundaries. With some exceptions, they were at best tolerated. Early superintendent Philetus W. Norris reported shooting some, and Schullery speculates some bears might have been tempted by poisoned carcasses set up to eradicate wolves and other scavenging canines. Nonetheless, the bear population in Yellowstone toward the end of the 19th century was, at the very least, noticeable, if not robust. According to Schullery, the spectacle of feeding bears garbage arose somewhat by accident. In the late 1880s, as hotels started cropping up around the Park, bears started hanging around hotel garbage dumps. By 1900, “the bear replaced Old Faithful as the most recognizable symbol of the park,” and bear feeding sites cropped up across the Park, rising with the number of visitors.

There, under the watchful and interpretive eye of an armed ranger, hundreds of visitors nightly watched crowds of grizzly bears paw through piles of hotel garbage, with the occasional added treat of a loud, spectacular fight to add a thrill to the evening. 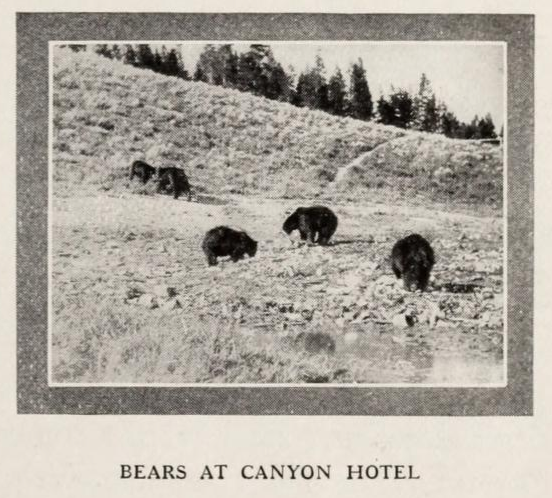 There was one animal the visitors never had any trouble seeing—bears. Even though most of Yellowstone’s big population of bears stayed in the wilds, there were a number of black bears that had become what we called “beggar bears,” or “hold-up bears.” They would hang around the roadsides waiting for visitors to stop their cars and throw out food.

“A Unique Souvenir to Take Home”

As mentioned, not all bear feedings took place at the garbage stations. There were many bears camped out by the roadside who would saunter up to wagons (and later, cars) to beg for scraps. Many visitors were only happy to oblige these “tame” animals, if by “tame” you mean “opportunistic.”

It’s an understatement to say that feeding wild bears at arm’s length was risky. In the best of circumstances, you could escape unscathed, but there were plenty of incidences in Yellowstone’s history were visitors were scratched up by these bears. Indeed, Albright had years of experience dealing with visitors who got scuffed up, embarrassed, and injured while feeding bears by hand. And Albright, accordingly, had a perfect riposte for every “victim” he met who sustained injuries feeding/taunting bears in the Park:

These black bears were not vicious, but they were big and powerful, and could be dangerous if provoked, and we constantly warned visitors that the bears were wild animals and should be treated with caution. But visitors would often hold out food with their hand, hoping to get a bear to rise up on its hind legs and reach. Occasionally the bear would bite or scratch the visitor in trying to reach the food. Then, of course, we would get an impassioned complaint about the “vicious” bear.

I would answer such complaints by first telling the visitor that he or she should not have held a hand out to the bear; second, that the wound was only superficial; and third, that the bear’s bite was actually a unique souvenir to take home. The third point rarely failed to convince the visitor that the bear bite or scratch was really something worthwhile.

Despite the apparent chicness of such wounds, Albright’s approach didn’t work on everyone. Indeed, when Harold Fabian, an old friend of Albright’s, brought his daughter to Yellowstone—and when she was subsequently scratched by a bear outside West Thumb—he had the perfect rejoinder for Albright’s glib guidance: “Well, she’s not going to be showing off the scratch … It’s high on her thigh.”

Albright also recounted one incident of a female visitor demanding the Park Service execute a bear after it ripped her dress off. As Albright notes, the woman had been at the Canyon lot feeding the bear in question all morning, getting it to stand on its hind legs; hardly a lecher, the black bear merely ripped the dress by accident when it dropped back down to four legs—perhaps a little deflated by the end of meal service for the morning. 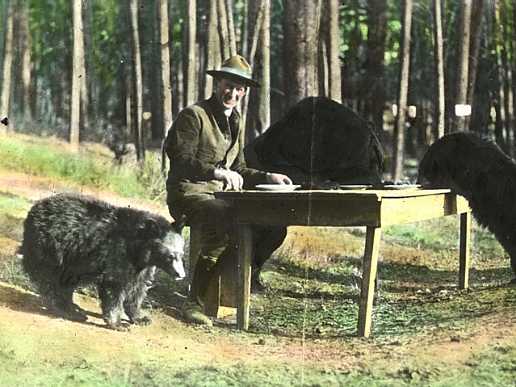 And while Albright counseled against feeding “hold-up” bears, he was no stranger to other “tame” Park bears, as seen in the ”bear dinner” photo above. Whatever his own reservations, he knew tourists loved bears, so such publicity was, to him, a positive gain.

The bear feeding sites were one big publicity stunt for the Park, one we (hopefully) recognize with a modicum of incredulity—to put it mildly. Besides injury and death, bear feeding led to property damage, both from bears clawing up cars and tearing down fences in search of grub. According to the Yellowstone Park Foundation, between 1931 and 1969, there were an average of 48 bear-related injuries to visitors in the Park—and over 100 cases of property damage!

In today’s bearscape, feeding them table scraps, much less constructing sites for their feeding to become spectacle, is unthinkable. And not even from a safety standpoint. Feeding bears in Yellowstone runs counter to the mission currently espoused by the NPS: to let bears (and other wildlife) live as unfettered and unguided as possible within Park boundaries.

Indeed, Schullery rather brilliantly sums up how, even after the decline of bear feeding sits and the end of roadside service for “hold-up” bears, how bear feeding still captures (and galls) our imagination:

Most of the conservation community now recognizes that the open garbage dumps of Yellowstone, with grizzly bears wading through piles of junk in search of food, were an awful thing to allow in a national park, but we must not underestimate the power of the show that went on for all those years. Many local people recall watching grizzly bears at dumps in or near the park, and though we may agree or (in my case at least) even strongly insist that it was ugly or wildly inappropriate, we also still shake our heads in wonder at the memory, and we unhesitatingly admit to ourselves how lucky we feel to have seen it. A grizzly bear is an impressive animal, whether you see it backlighted at dusk in an alpine meadow or wallowing in rotting trash. It is no wonder that Yellowstone came to mean bear country.

The public “bear viewing” dumpsites started shuttering during World War II, a little over a decade after the Park started tracking human-bear incidents more diligently. The practice did not really come to a full stop until much later, as “hold-up” bears lingered by the roadsides and bears still frequented garbage dumps within Park boundaries. It was not until 1970, when Yellowstone banned visitors from feeding bears and set up bearproof garbage containers around the Park, that bear feeding came to a full stop.

The first 2021 Yellowstone bear incident has been reported to National Park Service officials, as …