Cutthroat trout, cascading waterfalls: the Bechler River system in remote Yellowstone National Park seems to have it all.

When I say “remote,” I don’t mean to imply Yellowstone is remote—it certainly isn’t these days. But reaching the Bechler area of the park takes a bit of planning. It’s easy enough, for instance, to day-hike there from the Old Faithful area, or plan a longer trip, taking advantage of the many backcountry campsites. You can even visit the Bechler Ranger Station, located at the convergence of the Bechler Meadows, Cutoff, South Boundary and Robinson Circle Trails.

But, it’s fair to say, the region isn’t as well-known or well-traversed as they geyser portions of Yellowstone National Park. But it has more to offer than just scenic. Besides its unparalleled hiking and angling opportunities, it is the site of some of the most vehement battles over Yellowstone’s future as a national park—when the question of what was meant by “for the benefit and enjoyment of the people” was strenuously tested. Hayden survey member Henry Gannett (so-called “Father of the Quadrangle,” which is now standard for all U.S. topographical maps) claimed survey member Gustavus R. Bechler discovered his namesake river. However, discovery of what is now the Bechler River is attributed to trapper Osborne Russell (more famous for presiding as 2nd Supreme Judge of the Provisional Government of Oregon) who made several trips to the Yellowstone region between 1834 and 1837.

Mr. Gannett can hardly be faulted for such a claim, since Russell’s account of his journeys—Journal of a Trapper: Or, Nine Years in the Rocky Mountains, 1834-1843—was not published until 1921.

Although a noted member of several Hayden Geological Surveys (but not, however, the 1871 survey that contributed to the park’s creation in 1872), Bechler is all but a nonentity today.

Aubrey L. Haines, writing in Yellowstone Place Names: Mirrors of History, draws attention to the seeming void of Mr. Bechler in all this, calling him “a little-known topographer” whose name nonetheless graces some of Yellowstone’s most pristine landscape. “What gives?” Haines more or less asks in describing the decision to use Bechler’s name:

Beyond the fact that he was a topographer with the Snake River division of the Hayden Survey in 1872, Gustavus R. Bechler remains an unknown. Just why Dr. [Ferdinand Vandeveer] Hayden named such an important feature as a river for him—when he was not even its discoverer—is puzzling. According to Hayden:

Our hunter, Frank Mounts, had reported a valley about two miles south of us, through which a stream flowed westward. Accordingly, while the train moved about three miles nearly due east, to a new camp on Shoshone Lake Mr. Bechler and I crossed the southern divide tot eh head of the newly-reported river. We found it to be a large stream, formed, within a short distance, from the abundant flow of numerous large springs bursting from low down in the sides of a high plateau of very porous volcanic sandstones, which we afterward found to extend for several miles southward….In the absence of any prior designation, I have called this Bechler’s River.

The name was entered on the 1878 topographic sheet as Bechler’s Fork, and was put into its present form by the Geological Survey in 1885. Not much is known about Gustavus Bechler. He drew many of the maps of the 1872 Hayden survey, including the first one of Shoshone Geyser Basin and two very important and little-known maps of Upper, Midway, and Lower geyser basins [Bechler’s Lower Basin map above]. Sidford Hamp, a young man who accompanied the survey party that year, wrote to his mother on August 16, 1872: “I am with Mr. Bechler the map maker and he is rather slow so we don’t get into camp so soon as the others” (Hamp, 1872, p. 77). Bechler also accompanied the survey on its attempted ascent of Grand Teton in 1872 and sustained a bad fall in the process. He explored and mapped Cliff Lake (west of Yellowstone Park). Bechler stayed with Hayden until 1878, accompanying him on later surveys of Colorado and other parts of the West, but his cantankerous ways and his jealousy of other division leaders made him a difficult companion.

Whittlesey does not mention what evidence he rests his case that Bechler was a “difficult companion” on the Hayden surveys. Historian Richard A. Bartlett, in Yellowstone: A Wilderness Besieged, does mention Bechler as being “one of Hayden’s better topographers,” but does not elaborate further. According to Haines, its relative remoteness within the boundaries of Yellowstone made patrolling the region difficult. As such, it took several decades for army/ranger presence to make itself felt:

Although the need for protection from illegal activities was recognized as early as 1899, only an occasional patrol from the South Entrance or from Riverside Station was possible until 1911, when the Bechler Station was built on Wyoming Creek (mistakenly built there instead of on Rock Creek, at the Park corner). The soldier station became the Bechler River Ranger Station after the army left the Park, and was so shown on maps from 1928 on.

However, the 1920s also saw a heightened profile for the region, as Superintendent Horace Albright, a savvy promoter of Yellowstone National Park, rechristened the Bechler region “Cascade Corner,” in honor of its many waterfalls. Indeed, one of the largest falls along the river, cascading an impressive 260 feet, is now named for Albright. Other notable falls include the Colonnade Falls, Ouzel Falls, and Iris Falls, shown below in a Haynes postcard. 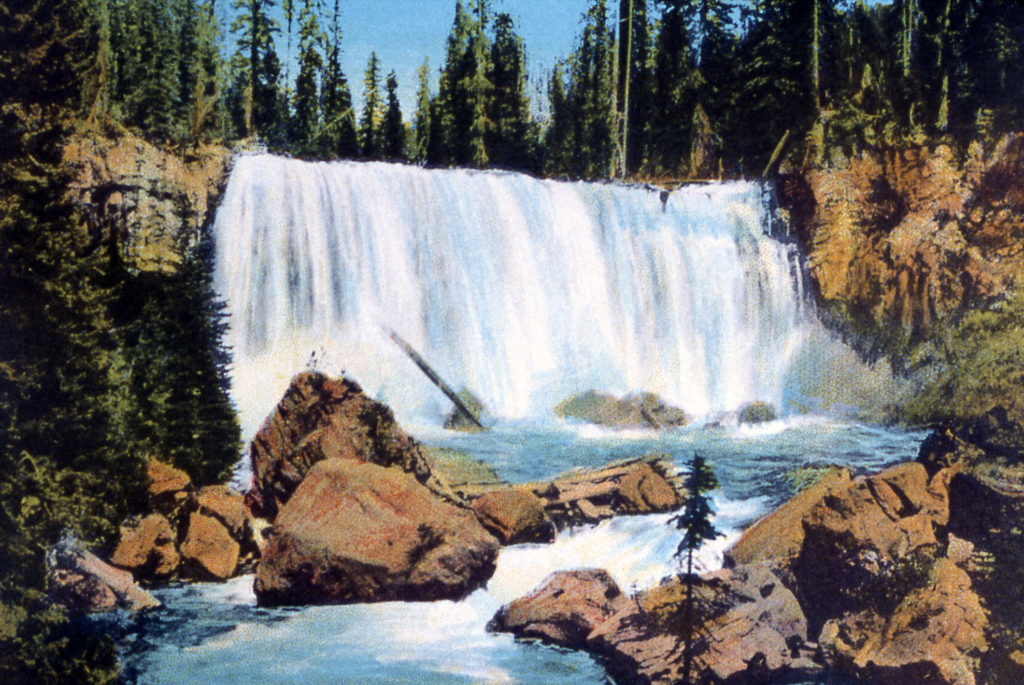 In the interim between Yellowstone’s establishment and the ramping up of official presence, many in Idaho eyed the Cascade Corner as choice territory. Indeed, after World War I, the region became a prime contender for damming and channeling, to satisfy the appetites of irrigation boosters in the Idaho Legislature.

The plans were part of a larger scheme to introduce dams into Yellowstone National Park. Most notably, the Montana Legislature, throughout the ‘20s and ‘30s, sought to dam Yellowstone Lake, ostensibly to prevent flooding.

This controversy is, of course, another story, but as Bartlett notes, interest in irrigating Idaho with the Cascade Corner meshed nicely with the ambitions of the Montana “dammers.” Indeed, according to Bartlett, the desire to commercialize Cascade Corner morphed, by the end of the ‘20s, into a full-fledged assault on the park’s boundaries, especially in the southern quarters. A special Coordinating Committee on National Parks and Forests convened to make recommendations in 1925, although the debate stretched on for five more years. From Bartlett:

So bitter were the controversies involved that even the committee’s operations were criticized. Publicist Robert Sterling Yard, writing in his capacity as secretary of the National Parks Association, protested that the committee had consulted the “political, business, and sporting sentiments of two individual states [Idaho and Wyoming]… without also investigating the sentiments of the immense national park public in other states.”

In the end, the committee recommended that the Bechler region remain in the park, since its rivers, cascades, and meadows “are of scenic charm and afford an engaging foreground to natural features of unusual interest … The region with its setting and surroundings forms a worthwhile part of Yellowstone Park.”

Besides irrigation plans, according to Bartlett, the state also planned “an access road … along the Bechler River.” This proposal fell through when the irrigation plan held no water among officials.

As mentioned at the start, the Bechler River today wends through some of the prettiest, most pristine landscape in Yellowstone National Park. Even if you’re not a dedicated hiker or angler, it’s well worth a visit. Indeed, for the most part, the main trial (which starts around the Lone Star Trailhead just outside Old Faithful) follows the Bechler River. It’s a difficult hike in terms of distance (approximately 30 miles) but that’s only if you make the whole trip.

Otherwise, we suggest packing a bag with necessary supplies, buying or renting a can of bear spray (you can never be too careful) and heading out.

What you are seeing these days in the Greater Yellowstone Area’s long, hot summer may …