Ringing In The New Year At Old Faithful

Only the diehards gathered at midnight around the world’s most famous geyser, Old Faithful.

At Old Faithful Snow Lodge in Yellowstone National Park, the nearly three feet of snow on the ground muffles the landscape in a wintry silence so deep and still you can nearly hear it.

So it’s not your typical New Year’s Eve party venue. But that’s the way a lot of park visitors like their New Year’s Eve—dark and quiet while they welcome the last eruption of Old Faithful in 2016 and then the first of 2017.

The New Year’s Eve at Old Faithful became something of a “thing” in 1999/2000, explained Rick Hoeninghausen, a spokesman with Xanterra Parks and Resorts, the private concession company that operate the park’s hotels. Geyser fans were anxious to say they had been present for Old Faithful’s first eruption of the 21st century.

This year, guests donned festive party hats provided by the hotel staff, enjoyed a tasty dinner special, sipped a bubbly beverage and stayed up until their best guess of the last eruption of Old Faithful in 2016.

Portions of Yellowstone are open for a limited winter season, including the Old Faithful Snow Lodge. No cars are allowed over the snowpacked roads, just limited, controlled numbers of snowmobilers led by guides and small numbers of snowcoaches and new passenger vans outfitted with gigantic, underinflated tires.

Guests were at Old Faithful for New Year’s Eve for various and sundry reasons. 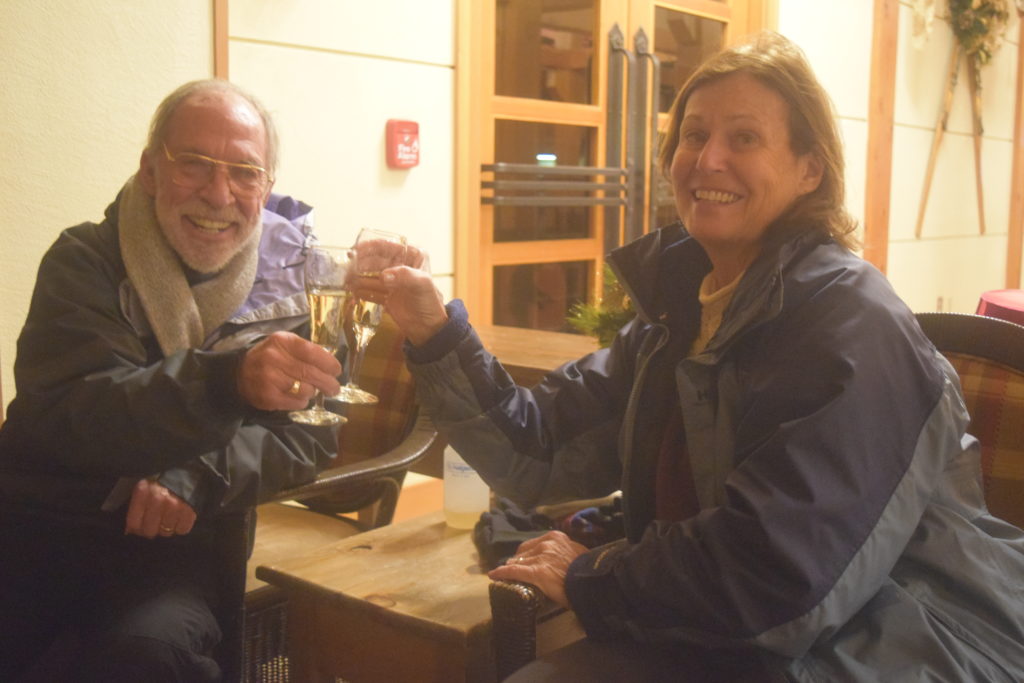 “We’re celebrating the 100th anniversary (of the National Park Service) and trying to see as many parks as possible,” Forrest said, sipping wine he had just brought in from outside, decanted from a plastic water bottle.

The Heatons sipped their sparkling wine out of doors by the famous geyser for the last eruption of the old year, which was at approximately 10:42 p.m. local time. They opted out of the first eruption of the New Year after getting thoroughly chilled in the -4 temperatures.

Forrest said he came to love Yellowstone after bringing his children to the park while on a two-month road trip back in 1968, camping out and visiting the big western national parks. Yellowstone was their favorite.

Forrest, who in addition to being a retired businessman is also a poet, shared a poem he had written on Dec. 31.

The clocks of our lives tick fast;

To learn earth’s future and its past.

Over four billion years its taken,

To get earth where it is today;

Take the time to visit,

Coincidentally and unrelated to the Heatons, but an NPCA-sponsored group tour was also at Old Faithful for the end of the year. It was led by guides Steve Gehman of Bozeman and Kurt Westenbarger and Eve Wills of Dillon.

Westenbarger has led the group to Old Faithful over New Year’s Eve for many years, he said, while pouring champagne or sparkling cider into plastic cups outside Saturday night. The snow was so deep the surrounding benches were nearly covered, but exposed just enough to make a stable platform for serving beverages. He was at Old Faithful in 1999/2000, which was well-attended for the end of the millennium.

In 2005/2006 on New Year’s Eve, he proposed to his now-wife, Eve Wills. He popped the question on the bridge across the Firehole River not far from the geyser.

“It took her a year to respond,” he quipped, perhaps not for the first time.

Kent Morby, of Salt Lake City, has made the winter trip over New Year’s a couple of times. He calls himself a “fan” of thermal features, but not a full-fledged “geyser gazer,” that is, a really devoted fan.

“Yellowstone is a gift of the geysers,” he said Saturday evening, noting that Yellowstone might not have become the world’s first national park if not for its numerous and unique thermal features.

Morby became entranced with Yellowstone in 1952, when he was 5 years old, on a road trip with his family.

“We stopped in West and my dad bought me a box of Ritz crackers to feed to the bears,” Morby recalled.

And he did, flinging the crackers from the back of a pickup truck. Of course, such behavior is prohibited now, to protect both people and the bears. Melody Sheldon, 15, from Pennsylvania, pictured above, was at Snow Lodge on the last day of the year with her mom and dad, Davy and Brad, to rack up her last two Junior Ranger badges—she reached 100 on the last day of the of the National Park Service centennial year. They nearly missed it because they were counting on a Grand Teton National Park badge, but none of the park’s visitor centers are open in winter, Brad explained. Fortunately, Melody was able to score two badges in Yellowstone, including a special winter badge.

Melody said she got the badge bug when she was 9. She saw a young girl who had a hat and a vest plastered with badges, and she wanted a vest, too. It was at that point she knew the family had to get serious about badge collecting.

“We really need to up our game,” she recalled.

To date, they’ve collected badges in 85 parks, monuments and historic sites. The next goal is to visit all the national parks in the lower 48 states. They have six to go.

At about 11:45 p.m., around 30 people had gathered at the boardwalk that surrounds the Old Faithful geyser, named in 1870 by member of the Washburn party who noticed its regular eruptions.

The last eruption of 2016 occurred around 10:42 p.m. There was no official prediction time because the rangers who make the prediction—which is based on the length of the previous one—were off-duty once the Old Faithful Visitor and Education Center closed at 5 p.m. Their last official prediction had been 5:48 p.m. The geyser averages about 90 minutes between eruptions these days, Snow Lodge front desk staff explained, so projecting an eruption ever 90 minutes from that time sent a number of people out to the boardwalk in the -4 temperatures at about 10:30 p.m.

About 20 people had gathered, bundled up against the cold, some with party hats over their hats and hoods. The night was sadly not ideal for dramatic, long-exposure photographs—the tiniest sliver of a new moon was obscured by a low-hanging geyser mist.

After the 10:42 p.m. eruption, everyone hurried back to the cozy lodge, some to bail out on waiting up for the next eruption, but many diehards ready to tough it out.

The first eruption of 2017 occurred around 12:11 a.m. The crowd was a little larger, maybe 40 people, who cheered, made toasts and even applauded the eruption, their applause muffled by gloves and mittens.

After the eruption, no one lingered—it was back to the hotel and straight to bed, to greet 2017 in Yellowstone.

Liz Kearney is a former Yellowstone tour guide and snowcoach driver. She lives in Livingston, Montana, where she covers the park and other news for the daily newspaper, the Livingston Enterprise.
Previous U.S. Forest Service Issues Temporary Shooting Bans On Land Near Gardiner
Next Grand Teton Advises Drivers To Slow Down Amid Winter Conditions