A New Zealand Fulbright Scholar will be studying microbes from Yellowstone National Park.

41-year-old microbiologist Matthew Stott (pictured above) will spend the next four months at Montana State University—and in the Park, of course—studying how Yellowstone’s heat-loving, acid-resistant microbes differ from bacteria living in hot springs in his native New Zealand, according to an MSU press release:

Stott works in conjunction with Eric Boyd, assistant professor in the MSU Department of Microbiology and Immunology in the College of Agriculture and the College of Letters and Science. Stott’s Fulbright project will compare the microorganisms living in Yellowstone’s geothermal springs to those of New Zealand’s Taupō Volcanic Zone.

“I’m interested in the geothermally heated soils and the bacteria that make a living in them,” Stott said, “how they interact with their environment, how they grow, why they grow where they do and what sort of conditions help them grow.”

Taupō, located in the central part of New Zealand’s North Island, is near a subduction zone, where one of the planet’s tectonic plates is sliding beneath another. Consequently, Earth’s crust is thin there, only about 10 miles thick, and Taupō is rife with hot springs like those found in Yellowstone.

But, they are also unlike Yellowstone’s hot springs, at least microbiologically speaking, Stott said. And that’s what makes it interesting.

“In microbiology, you assume all microbes are everywhere and that environment is the main selecting factor,” he said. “So the idea is if you have two identical hot springs on opposite sides of the world, they should have the same microbiology. In reality, they don’t. My hypothesis is that while the microbiology won’t be the same, the organisms might be expressing the same genes.”

In other words, he’s looking at how microbes on opposite sides of the planet have dealt in similar environments by finding unique evolutionary pathways to survival.

Stott’s work will involve collecting samples from various Yellowstone hot springs, which will involve getting up close and personal with some. Indeed, among the various equipment Stott carries while collecting is a meter that registers poisonous emissions. And, Stott adds, he has to be extra careful with his footing. “You can recognize the ground when it’s rubbish and you don’t want to go near it,” Stott said in the press release. 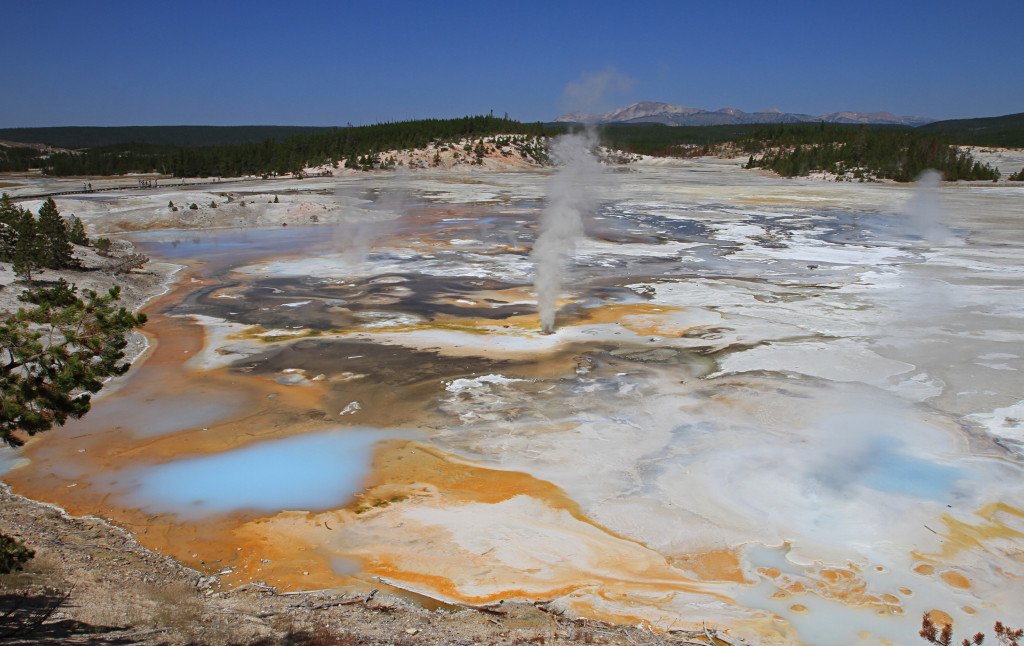 Yellowstone microbes are valued in the field of microbiology and have a variety of applications. Just earlier this year, the Oak Ridge National Laboratory announced they had isolated a long-elusive strain of microbe called Nanopusillus acidilobi, which promised “new exciting insights into the microbial diversity with important phylogenetic implications and thus represents a very important contribution in the archaeal/microbial diversity field.” Last year, a Berkeley-based startup named CinderBio announced they had derived a new enzyme from Yellowstone’s hot springs, which the company hopes will revolutionize the food processing industry by replacing chemical washers and cutting down on water usage. Finally, enzymes from Yellowstone hot springs were touted as essential for a potential Ebola field diagnosis tool from Middleton, Wisconsin-based Lucigen Corp.

For Stott, his interest in high-temperature microbes grew out of an appreciation for the environment—specifically cleaning it up after toxic spills and industrial disasters. Indeed, his previous research delved into using bacteria to reduce mining waste. From the MSU press release:

“It’s a passion, an absolute passion,” he said.

Since many industrial applications also involve harsh conditions, microbes that can tolerate those environments can be put to use in processes such as breaking down ore, as industrial detergents or even in cleaning up gas emissions.

“Life has had 3.8 billion years to evolve and adapt to really unusual conditions on Earth,” Stott said. “If you go searching hard enough and long enough, you’ll find that life has sorted out a solution to many of the things we’re interested in.”

MSU, he said, was a natural choice for his Fulbright.

“The first place you come across if you’re looking for work on extremophile organisms is MSU, absolutely,” he said. “I’ve known about Eric’s geomicrobiology and thermophile work for some time, so it was an easy decision to come and work with him at MSU. Eric’s research is world-leading and I’ve learned a heap from him and his team already.”

When he returns to New Zealand in December, Stott will continue work on a project to look at the chemistry and microbial diversity of hot springs in Taupō, a project known as One Thousand Springs.

Boyd said Stott has fostered an extremely creative environment in the lab.

“He has great vision in hot springs geobiology and is doing extremely interesting research and as such has brought a unique perspective to our lab,” Boyd said.

He has also taught the MSU team new safety techniques for working in the field, which has been welcome, Boyd said.

“Our fieldwork is extremely dangerous and we welcome what he can teach us about improving our safety practices,” he said.

In addition, November 1, 2016, Stott will deliver a lecture at the Procrastinator Theater, located in the Strand Union Building, at MSU. His lecture, part of the Microbiology and Immunology Presents Lecture Seminar Series, will start at 2 p.m. and run for 50 minutes. Yellowstone Superintendent Could Be Reassigned Under Interior Proposal