Time is running out for the Yellowstone Lake Robot Kickstarter.

Earlier this year, we reported the Global Foundation for Ocean Exploration (GFOE) was building a new diving robot to probe the depths of Yellowstone Lake to learn more about thermal activity on the lake floor. The initiative was geared at adapting existing ocean exploratory technology to a lacustrine setting. We also reported that the Foundation was setting up a Kickstarter to offset some of the cost of both the robot (shown below, courtesy of the GFOE) and an accompanying research boat. 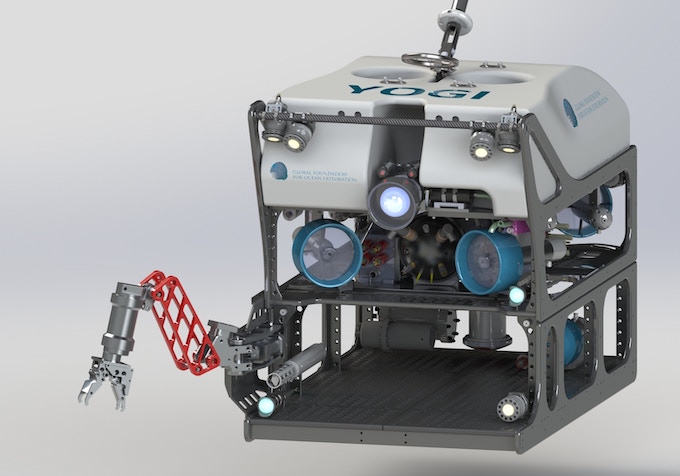 As of writing however, the Yellowstone Lake Robot Kickstarter is approximately $20,000 short of its goal—with eight hours to go. If you’re interested in the technology at hand, or feel passionate about Yellowstone research, you should get off your butt and donate as soon as possible. From the Foundation Kickstarter:

Yellowstone started a proud tradition of protecting our planet’s most unique environments when it became the world’s first National Park more than a century ago. However, there is a part of Yellowstone that very few people have visited. An entire ecosystem that is hidden from us at the surface. A place that scientists are eager to study and may harbor unknown life; the depths of Yellowstone Lake.

We now know that the bottom of the Lake is far from barren, hosting species of crustaceans, sponges, and even small creatures that feed off of the Earth’s heat and chemistry rather than the Sun. ‘Thermophilic’ (or hot water-loving) microbes thrive in the relatively high-temperatures immediately surrounding active thermal features at the bottom of the Lake and scattered throughout Yellowstone Park. These creatures may be microscopic but they have the potential to profoundly influence the medical and biological sciences.

With your help we plan to support the National Park Service by building and operating “Yogi” the Robot, which will be capable of gathering the data they need to more thoroughly understand this unique ecosystem. It is now more feasible and cost-effective to develop a high-quality robotic platform than ever before and it’s finally time to take exploration in Yellowstone Lake to the next level.

The Kickstarter adds that “Yogi” will likely have a lifespan of 10-20 years, which means it could be exploring Yellowstone Lake for a long while. Or in other lakes!

UPDATE: As of  8:39 MT Wednesday, May 4, the Yellowstone Lake Robot Kickstarter has reached its funding goal of at least $100,000.