Grotto Geyser is, hands-down, one of the most unusual thermal features in Yellowstone National Park.

A bit far from the Old Faithful area, but still close enough to walk to, Grotto immediately arrests visitors who walk by it. It’s unlike anything else in the Park—more unique than nearby Castle Geyser, or the Mammoth Terraces, or even the much-vaunted Grand Prismatic Spring.

Because really, what else can equal Grotto’s formation: a lump of bright white rock riddled with holes. An artist’s imagination would have been too limited for such an enterprise.

The name “grotto” attracts romantic notions, of reveling and revelation in nature. Never mind the religious associations. It’s fitting that English poet William Wordsworth should have written a poem in a grotto. It’s aptly titled too: “Written in a Grotto:” “Each night, while I recline within this cell / Guide hither, O sweet Moon, the maid I love so well.”

Some, like Janet Chapple in Yellowstone Treasures, have described Grotto Geyser as “grotesque,” which is still a rather Romantic reaction. Nonetheless, whether you think it’s sublime or grotesque, Grotto is undeniable. It would be fantastic enough if Grotto Geyser merely steamed or stood, like some abstract sculpture. And yet, Grotto is an erupting geyser, and a pretty powerful one too, sending water out from its various holes, in a remarkable display. Lee H. Whittlesey, writing in Yellowstone Place Names, explains the nature of Grotto Geyser and its eruptions:

In a fascinating demonstration of interplay, Grotto Geyser is believed to be linked with nearby Giant Geyser, which recently roared back to life. Indeed, Marathon eruptions are associated with Giant activity, according to the Geyser Observation and Study Association. Indeed, Grotto Geyser is linked to several other geysers that impact its eruption cycle: Rocket, Spa, and Grotto Fountain as well as Marathon Pool.

Further, Lew and Jan Johns of the GOSA have a means of predicting the time of the next eruption: just watch its current eruption and measure how long it lasts, then plug that data into their Interval Between Eruptions equation:

D = duration of eruptions in minutes. Grotto Geyser was originally named on the 1870 Washburn Expedition. Nathaniel Pitt Langford wrote about the geyser extensively in his diary of the expedition:

The “Grotto,” so named from the singularly winding apertures penetrating the sinter surrounding it, was at rest when we first discovered it. Externally it presented few indications of its character as a geyser. Private Williamson, one of our escort, crawled through an aperture and looked into the discharging orifice. When afterwards, he saw it belching forth a column of boiling water two feet in diameter to the height of sixty feet, and a scalding steam of two hundred square inches flowing from the cavern he had entered a short time before, he said that he felt like one who had narrowly escaped being summarily cooked (109-110).

Langford later echoed his diary entry in an article for Scribner’s Monthly:

“The Grotto” was so named from its singular crater of vitrified sinter, full of large, sinuous apertures. Through one of these, on our first visit, one of our company crawled to the discharging orifice; and when, a few hours afterwards, he saw a volume of boiling water, four feet in diameter, shooting through it to the height of sixty feet, and a scalding stream of two hundred inches flowing from the aperture he had entered a short time before, he concluded he had narrowly escaped being summarily cooked. The discharge of this geyser continued for nearly half an hour (124).

The 1871 Hayden Geological Survey observed Grotto Geyser while it traveled through the Yellowstone region; photographer William Henry Jackson even managed to obtain a photo of Grotto, although they were out of luck for seeing the Upper Geyser Basin’s other star attractions. 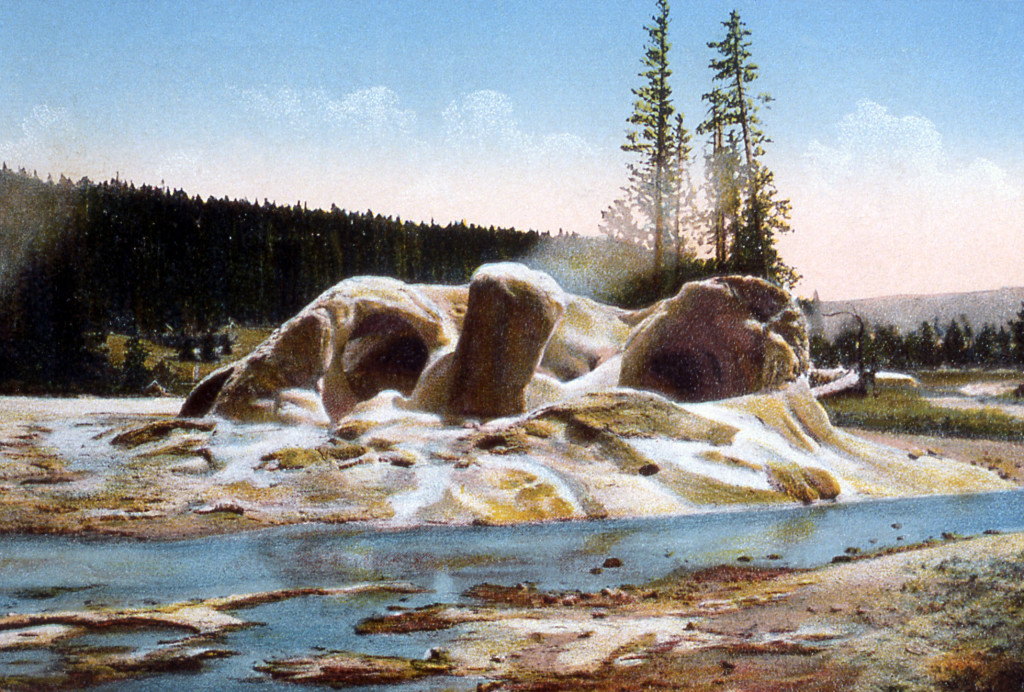 At the same time Grotto has been the subject of great appreciation, it’s also been subject to unfortunate vandalism and recklessness, especially in the early years of the Park. Whittlesey writes:

The apertures in the geyser crater intrigued early visitors, who often reported crawling through them. Capt. J.W. Barlow observed in 1871 that the crater of Grotto Geyser was “hollowed into fantastic arches, with pillars and walls of almost indescribable variety” (Barlow, 1872, p. 26). The crater of Grotto Geyser also attracted vandals. As William Ludlow wrote in 1875, “after seeing the injury done to its crater by visitors, the large majority of whom are residents of the [Montana] Territory, we could not help wishing the discharge of boiling water were absolutely continuous” (Ludlow, 1876, p. 132)” (Whittlesey 124).

Perhaps those visitors were climbing in to wait for the moon, like Wordsworth, though it’s likely the water would have come and scoured them away before they could have waxed poetic. As the Park became more popular, with the arrival of the Army in 1886 and the influx of railroad and stagecoach passengers, Grotto Geyser remained a constant fixation for visitors. Read what the 1899 Haynes Guide had to say about Grotto:

By far the most curious geyser cone of all is that of the Grotto, situated close by the roadside, some 500 feet northwest of the Giant. The various cave-like openings in its peculiarly shaped cone give rise to its name … Separated from the main cone some twenty feet is a smaller crater which acts with the main geyser during eruptions (63).

Later Haynes guides would condense their descriptions of Grotto, although they would acknowledge the geyser’s unique structure as a constant fascination.