If you’ve made any travels in the greater Yellowstone region, you know of the bounty of natural splendor such travels afford.

And if you haven’t explored the region in-depth, you might want to start. Or, at the very least, read up on it. A good place to start is with Jack Turner’s Travels in the Greater Yellowstone.

Turner, both in writing and in person, seems to be an archetype of the region: a mountaineering guide who has lived around Jackson Hole for years, who previously taught philosophy at the University of Illinois and has traveled the globe scaling some of the world’s most impressive peaks, living in intimate knowledge of the going-ons of Yellowstone (and Grand Teton’s) flora and fauna.

Travels in the Greater Yellowstone is not Turner’s first book (his previous titles include the feted Teewinot and a book of essays entitled The Abstract Wild) but it is perhaps his most noteworthy, since it helped earn him a Whiting award.

In Travels he characterizes himself as a resident. He resists (he tries to attest, anyhow) trying to be an authority. “I am neither a scientist nor a historian. My intent is neither comprehensive coverage nor definitive detail,” Turner cautions the reader in his preface.

Rather, he casts himself as an observer, as an interested party. And in Travels in the Greater Yellowstone, he picks numerous spots to make his observations, including Blacktail Butte (in Grand Teton National Park) where he explains (in part) his perspective of the region:

It is a particularly fine location for seeing the result of geological processes in Jackson Hole. Faulting induced by earthquakes and the consequences of glaciation jump out at you—even amateurs like us [Turner and his wife Dana] can make sense of what happened (18). Indeed, one of the dilemmas inherent to Travels in the Greater Yellowstone is how Turner relates himself to the region. Or, rather, how everyone else relates themselves to the region. Turner makes no bones about his own views and positions on myriads of issues.

For instance, in a chapter entitled “Modern Wolves,” Turner recounts escorting Renée Askins, founder of the Wolf Fund and author of the superb memoir Shadow Mountain, to a lecture in Dubois, Wyoming armed with a 9 mm semi-automatic, with a .357 magnum as backup.

The encounter never came to gunslinging, although Turner deployed plenty of verbal ammunition refuting what he called “wolf haters” (66).

Turner, although he cherishes seeing wolves in Yellowstone again after their long absence, cannot wholeheartedly rejoice. He writes: “[Park biologists] suggest that by reintroducing wolves they have reintroduced the ‘wild,’ as though that rare quality could be shipped air freight from Canada” (57).

Indeed, “wildness” is a quality he finds all but absent in the area, especially in Yellowstone’s trout population:

I reserve that classy appellation for: (a) populations that arrive in their habitat under their own power and not by cargo ships, trains, strings of pack animals, and buckets; and (b) fish that survived on their own, enduring the exacting perils of evolution, not those that survived with the assistance of our ministrations (47).

And as for the region as a whole? Turner writes, just following his definitions of wild: “Imagine Greater Yellowstone is like a human body with numerous artificial organs and limbs that is beset by more than 200 tumors. Then decide whether that body is intact.”

And woe betide the “new arrivals and tourists” who sweep into the region, if they try and assert they know about the Greater Yellowstone region. In Turner’s estimation, they can’t possibly know what it’s all about. Not the way he knows. To say Turner is opinionated is an understatement. 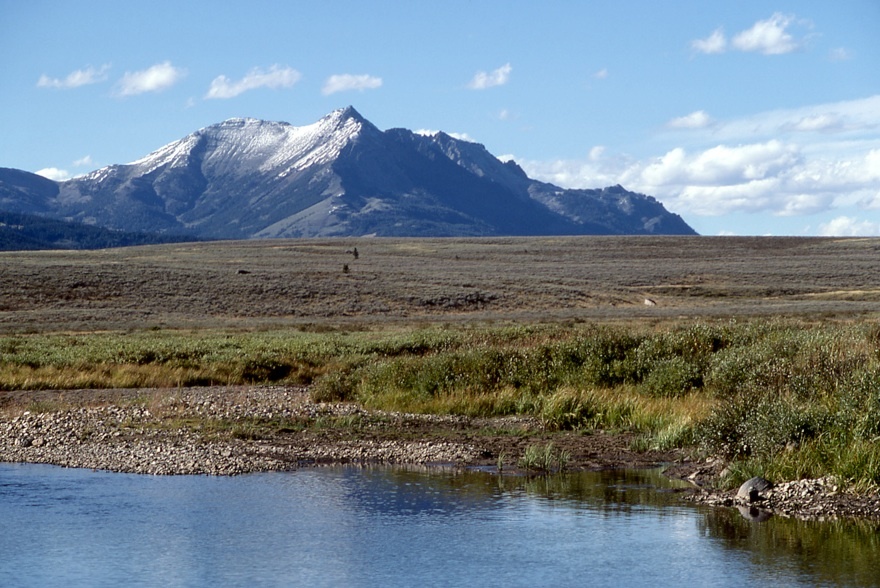 Nonetheless, the Turner that emerges from these pages is by turns funny, eloquent, profound, gentle, recalcitrant, presumptive, and thorny. In these pages, Turner does his best to live his philosophy of the region. To wit: for all the marvelous beauty found in the Greater Yellowstone region, Turner believes it’s been too tampered with, is too (meta)physically fettered, and is on the decline… at least in the short term. Unless climate change is as catastrophic as our worst scenarios.

So why stay in a supposedly decaying place? Where Turner’s ideal of “wildness” is a lie in advertising? Out of love. Out of desire. Because the region exemplifies much of what he cherishes in life, as he describes in the “Alpine Tundra: The First Domino” chapter:

When I first went into the mountains as a young man more than fifty years ago, I believed that within the clarity of immense space I would glimpse a truth. I’ve often sought that vision—looking across a sea of metallic ridges in the Hindu Kush, or the numberless dunes of the Taklimakan Desert, or the endless glaciers leading to K2, or the infinite green canopy east of the Andes, or the adamantine snowy plains of Tibet. I believe it now, though it eludes me still (95-6).

Occasionally though, Turner’s out-loud musings seem risible and ostentatious. And he seems to be aware of it too. Consider this exchange that happens in the “Christmas at Old Faithful” chapter, where Turner, his wife, and a newlywed bride talk about a dead pine marten spotted while riding around in a snowcoach near West Thumb:

“What is a pine marten?” the new bride asks, to no one in particular.

“It’s basically a sable,” I reply, “like the critters Karl Lagerfeld uses to make fur coats for Fendo. That should be a felony punishable by public castration, disembowelment, and quartering.”

“Aren’t your watercolor brushes made from sable?” Dana asks. I’m being punished for bringing my romantic to this very unromantic spot and acting in such an unromantic fashion (247).

Who speaks like this to a complete stranger? Turner purports to—and it’s consistent with the long view he takes in Travels in the Greater Yellowstone—from Blacktail Butte to the future of the region. However pessimistic he is about the region’s ecological prospects, his pessimism is leavened with wonder. Turner loves the Greater Yellowstone—enough to stake decorum on it.

You can order Travels in the Greater Yellowstone here.