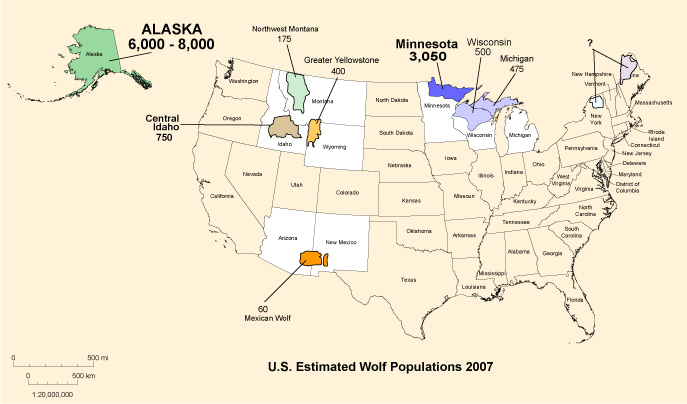 How many wolves are enough / too many?

As part of the original agreement for reintroducing wolves in 1995, the recovery goals were set at a total of 300 individual wolves, approximately 100 in each of the three recovery areas (Yellowstone, Central Idaho, and Northwestern Montana). If the reintroduction program was successful, the wolves would be delisted from the National Registry of Endangered Species, and their management turned over from the federal Fish and Wildlife Service (FWS) to similar agencies in Wyoming, Montana, and Idaho. Each state agency was required to submit a wolf management plan, which they did (amid much controversy), and for the most part they used the original wolf figures as their benchmark.

From an ecological point of view, the wolf reintroduction is considered one of the most successful wildlife programs in U.S. history. Five years after reintroduction, the target populations were exceeded. For the most recent year of record, 2006, the surveyed total wolf population was 1,243 (Wyoming:371, Montana:159, Idaho:713). The estimate for 2007 is aproximately 1,500. Gray wolves in the Northern Rockies were officially delisted in early April, 2008.

At the heart of the coalition argument are studies that indicate that neither the original recovery target population nor the existing population is enough to ensure the genetic vitality of the gray wolf in the Rockies. It’s their contention that the wolf reintroduction target figures were developed without the benefit of field studies and were simply estimates of what was possible. More than ten years and many studies later, it’s contended that a total population on the order of 2,000 to 2,500 wolves are necessary for appropriate genetic mixing.

Some of the state agencies, Wyoming in particular, challenge these studies. Their contention, one held by some wolf biologists, is that the original target numbers are adequate for wolf reproduction, and if there should be any difficulty with genetic diversity, wolves can be transported to produce genetic mix. Suggestions that the wolf population should be several thousand they consider unrealistic and unnecessary for the Northern Rockies.

Around the United States

Minnesota has been living with a wolf population over 3,000, which is double the total number of wolves in the three western states. It also has almost 500 packs (roughly, breeding pairs), more than the rest of the country (except Alaska) combined. The vast majority of these wolves live in the northeast portion of the state, an area not much bigger than the Greater Yellowstone Ecosystem. In Minnesota the wolves were also recently delisted. Both Michigan and Wisconsin have about 500 wolves, more than either Wyoming or Montana. As might be expected, Alaska has the greatest number of wolves in the U.S. with a population between 6,000 and 8,000, and wolves are hunted commercially. There are small populations (under 100) of Eastern Timber Wolves in the Northeast (mostly Maine and New York), and an experimental population of Mexican Gray Wolves in Arizona and New Mexico.

Although Canada has a similar anti-wolf history as the United States., the extermination programs were not as comprehensive, and public opinion about killing wolves shifted before the wolves were eradicated. Today, Canada has a relatively stable wolf population of about 50,000-60,000 widely distributed across the country, but missing almost entirely from the prairie areas. Quebec, Ontario, and British Columbia have about 8,000 wolves each; Manitoba, Saskatchewan, and Alberta have about 4,000 wolves each. Wolves are not protected in Canada and are freely hunted, in fact Canada is a major exporter of wolf furs. It’s important to keep in mind that Canada has a large ‘pool area’ of wolf-favorable terrain (few people, adequate game animals) especially in the northern half of the country that can act as a reservoir of wolves when populations decline in other parts of Canada. In fact, Canada itself has provided a similar reservoir effect for the United States wolf population.

In general, Canada has about as much controversy over wolf management as the United States. Wolves in Canada are unpopular with farmers, ranchers, and hunters; just like the U.S. and almost every year sees attempts to use wolf management for political as well as economic advantage.

Wolves in Yellowstone: About Wolves

Wolves in Yellowstone: A Short History

When and Where to See Wolves

Previous Inside the Park: Campgrounds
Next Old Faithful Lodge Cabins